Transcentury is 4 electronic tracks inspired by flamboyant characters. Transcentury is a made up word by the band, meaning people who are not afraid to be different and stand out from the crowd. The title track invites you into their world and lists the people and the albums they are inspired by and has a dance & experimental feel.  Disco bunny is a positive upbeat futuristic disco-inspired track about a street performer called Pablo who dresses up as 'The Disco Bunny’. Sapphire is atmospheric synth about a man on the streets of Bristol (UK) who dresses in women's clothing and looks like a carnival queen.
Anthemic “Pride In All Of US’ is about LGSM activist Mark Ashton (Pride Movie) and is documentary in style.

This Human Condition’s debut single ‘Telepathic Heights’ was inspired by a riot that took place in 2011 in the Stokes Croft area of Bristol, England. The riot followed a raid by police on a squat named Telepathic Heights. A crowd quickly gathered, with approximately 300 people defending the squat and a 1,000 more caught up in the mayhem. Using 90s synthesizer sounds, helicopters, and some Indian chanting, This Human Condition’s song conveys the emotion felt from the chaos and disorder of that riot.

This Human Condition’s single from their debut album ‘Project Zero’ is set to a dark, twisting and introspective atmosphere with Erasure-esque soundscapes. Written on the day Alan Turing received a posthumous royal pardon, ‘Breaking The Code’ is a tribute to the enigma code breaker. The release features two contrasting remixes from Sauerwelt and LPF. 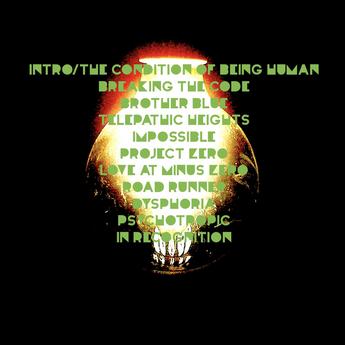 This Human Condition's debut EP brings you electronic music with great heart and intelligence. Expect trippy climaxes to rise only to be broken by their own crescendo. With songs about mental health, unrequited love and taking back control, and even a song inspired by Paul Gilding's Ted talk, The Earth is Full.  This EP has an edgy uncomfortable feel to it, which draws you in.

​This Human Condition is back with ‘Normal’ an electronic Calypso (Calypso-tronica) inspired track that makes you smile from start to finish, the message being it’s ok not to be normal. With it's infectious brass and soothing carefree vibe it makes you think of sunshine and tropical beaches. If you could capture sunshine into a song then Normal has it by the bucket load, almost like they have captured electronic sunshine in a shot of Rum. Taken from the recently released EP 'Normal People Are Crazy' paired with 'Night Is Gone' is tropical house track with a moombahton feel, and ‘SexPulse’ a soulful trap tune that has a feeling of vulnerability and fragility.

​Living For The Summertime is a Synth-Pop track all about heading down to worthy farm (Glastonbury Festival) In 2017 This Human Condition performed on the Mini Pyramid stage at Glastonbury Festival, this song is inspired by that experience and their love for early electronic music.

Project Zero is This Human condition's debut album with songs about hitting rock bottom and rebuilding your life. The album begins with a short intro explaining "The Human Condition" and then launches into "Breaking The Code" a song about “Enigma Code Breaker, Alan Turing. "Telepathic Heights" explores a local neighborhood hitting rock bottom during a riot. Project Zero blends many different styles of electro, including synth-pop, trip hop, dance, pop, house, trance, dubstep etc...Think early, “Depeche Mode” meets a darker “Erasure,” or “The  Prodigy” meets Boy George and makes a style they call "Handbag Electro Punk." Project zero explores themes dealing with Abuse, Depression, Family, Gender Dysphoria, Psychosis, Relationships, Riots, Sexuality & Suicide. Whether drawing from their own experiences or other people’s, Project Zero is ultimately about confronting difficult issues in order to evolve, to promote healing and to inspire hope.

(Released March 27th, 2020)A bass driven synthesizer track about falling in love with a Grandiose Narcissist!

Remixes from Fused and Audio Fetish.